Righto this is the first of two posts for today, yep this is what you could call the “double event”…anyway as I don’t want to combine a boring “ramble on rules” with some fun pictures that came about from testing said boring update of rules this post includes my current batch of updates for the FUBAR VSF rule set…tatatataaa rules covering Martian Tripods!

I’ve got everything nicely settled for my Human Super Heavy Ironclads i.e. Landships and the Martian Tripod rules are based on them to keep everything simple! Of course everyone can change the rules however they want to cover Martian Tripods but this is my take and I hope to make these Critters just a little bit better than anything Humanity can field against them. I have built one Tripod so far and will eventually put a second together but that’ll be it. 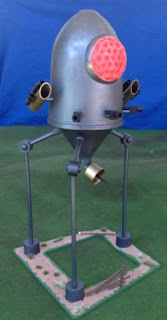 
The standard Damage and Catastrophe Tables are used for hits on Tripods with the following updates:

All Crew and Suppression Hits are ignored

After the FORTH Immobilised result the Tripod is immobilised

I have included the following clarifications into the FUBAR VSF rules concerning how Tripods activities are covered:

Posted by Captain Darling at 20:45