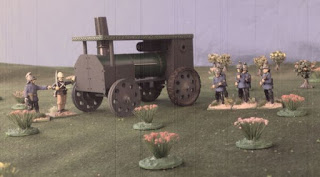 Well I needed a unit of Engineers for my 1870's FUBAR VSF games (don't we all!) so I bought some of  the Ironclad VBCW Firemen as my proxies. I picked them as I thought they were cool figures and I really liked them! Even though for a later period these will fit in well with my VSF figures and as engineers they'll have the ability to expertly use of explosives etc and are armed with the latest Light Rapid Fire Carbine (read SMG) and magazine fed Galvanic Rifles. As per all the figures I've bought from Ironclad Miniatures they are crisply cast. I do notice in their ranges the stances are a bit similar for their long armed figures i.e.  kneeling, rifle at the ready and rifle in advance pose anyway I like the uniforms and quality you get. If I didn't make my own VSF vehicles I'd definitely get some of the ones Ironclad stock! Enough jabbering here they are painted as best I can! 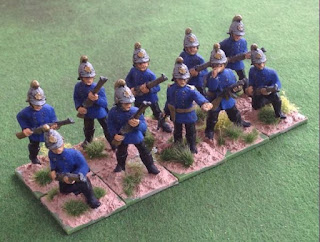 Well of course Engineers need transport so I have put together an Armoured Steam Tractor which as soon as I get the small Lego wheels I ordered will have a trailer (including coal supply) to tow!

I modelled this after a picture of a period steam tractor I found on the net. It is a regular production one with an armoured, floor, front plate and cabin added so I get to use some brighter colours mixed with military grey armopur plates. The wheels are the newly developed armoured style fully cast. By armouring the cabin it saved a lot of detailing! When not in action the rear cab door is locked open to allow for ventilation and coal to be accessed from the (soon to be added) trailer. Once action is joined the fire box is filled to brimming and the cabin is buttoned up! Don't fear the intrepid Commander/Driver and Sergeant/Stoker have asbestos impregnated uniforms so they are safe from the fetid conditions of the enclosed cab unfortunately for them OH&S is a 21st Century thing!

Here's the basic bits in one place! I straight away gave the roof a coat of 'Heritage Green' from a cheapie spray can just to see what the colour was like and I'm pretty happy with it. I intend for this to be painted brightly in the style of the time but with added on dull coloured armour plates and armoured wheels. This is to be built with the usual stuff I use styrene sheet, plastic tubing and odds and ends. 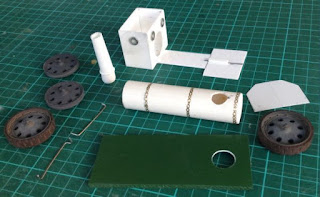 Here are all the parts painted and awaiting assembly! The wheels are from a friend who had them spare when he abandoned building a WW II German big artillery gun, the smoke stack is part of a electric toothbrush head, the piston thingee for above the main chamber is a medicine tube cap and the axles are coat hanger wire. I used some sticky strips from the scrap booking area of Spotlight for the 'Victorian Embossing'. 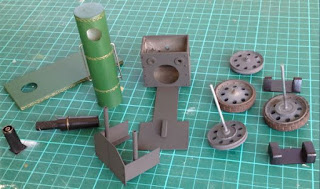 And these are the final pictures! Just needs the trailer to be complete! 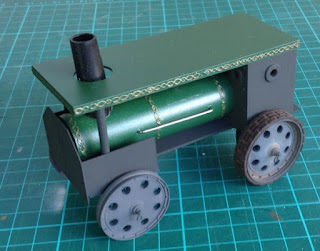 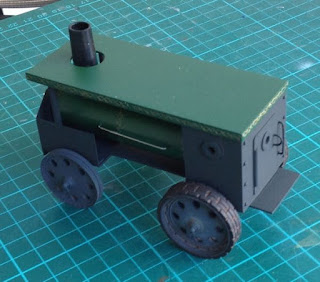 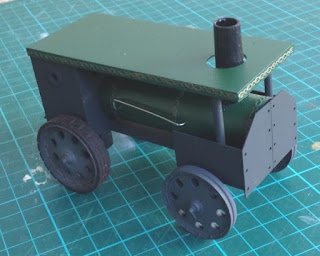 I hope you enjoy this latest piece of VSF equipment and feel happy to use the design to expand your own fleet of vehicles!

Oh yeah and as promised last time next time back to 'The Russians Are Coming!' Scenario Four details and AAR...yeah like you believe that!
Posted by Captain Darling at 22:30