The Russian Invasion of the Colony of South Australia was not Captain Darlings first encounter with the Imperial Russian Army, he had fought alongside them during the Second Great Martian Invasion of Earth with the 3rd Steam Powered Armoured Brigade comprising men from the British, French and Russian Empires in the Crimean theatre of operations during 1875. It was during this period of Darling's life that he acquired his fondness of vodka and caviar. He got on well with the Russian warriors of the Brigade and preferred their company to that of the French,he was heared to have said:

"You know where you stand with simple Russian folk but how can you trust a Frenchman who scoffs frogs legs and washes it down with red wine that would be best used to strip paint from a privy door!"

The 3rd Steam Powered Armoured Brigade fought continuously against the Martian invaders until their defeat in 1876 and was looked upon as an elite force with a prestigious reputation.


There is only one known picture of the good Captain from that era it is of poor quality and is below. He was photographed by the wreckage of a Martian Scout Tripod Machine in the company of a Russian staff office called Colonel Ovsiannikov who is on his left and another unknown junior officer carrying a Russian standard to his right. 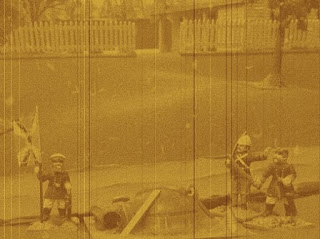 Posted by Captain Darling at 16:32