The defence forces of the Colony of South Australia had a chequered history since its establishment in 1836. Since South Australia was established as a free colony garrisons were not required as prison guards like the other colonies so very few British troops were at hand for use by the Govenor. Over the years mainly due to invasion fears from France and Russia militia forces were raised but the numbers then dwindled as the fear of invasion did.


The Russo-Turkish War of 1877 raised the fear of a Russian invasion yet again. At the same time a delegation from Britain was appointed by Government to visit the Australian colonies and furnish a report on the means of improving their defences. A memorandum on defence was laid before the South Australian House of Assembly on 12th of December 1877. It recommended raising a land force consisting of 940 men, for the building of two coastal forts; the completion of a military road along the coastline before the City of Adelaide, torpedoes to be placed across Port Creek and a supply of field guns to be amassed. A further recommendation was for the purchase of an ironclad. This plan was far from complete when the first Cossack placed his foot ashore at Henley Beach on Sunday 17th August 1879.


Two battalions consisting of 21 Volunteer Rifle companies existed when the invasion commenced. Company strengths varied from 45 to 100 men. They were deployed far and wide across the Colony and would need to be mustered for service. Luckily the strongest and best trained of these units were located in around the City of Adelaide so would be ready for action promptly. A couple of companies of Mounted Rifles were present in Adelaide too these were not cavalry and were not expected to fight on horseback.


The average South Australian militia man was enthusiastic to defend his homeland and well trained in the use of his rifle (the Martini-Henry) as attendance of training sessions and the many shooting competitions was very high. But these militiamen were untried in action and Lietenant-Colonel Downes believed he commanded a force that would be best used in shooting matches from good positions rather than used in grand charges and close combat his decisions during the campaign reflected his beliefs. Other South Australians (like Captain Darling) had complete confidence in the rank and file and thought if lead well could accomplish anything!


Two Batteries of relatively light artillery were available and they were manned by well trained and dedicated crewmen. They could not be expected to duel with the Russian fleet and its big gun ships hence the rapid withdrawal of the Colonies forces from the coast.


Regarding fixed coastal defenses in 1879 the Colony had nothing to offer, the Russians had selected the time of their invasion well the first of three proposed forts, Glanville was not anticipated to be even partially operational until 1880 and the others at Glenelg and Largs existed on paper only when the invasion fleet appeared on the horizon! 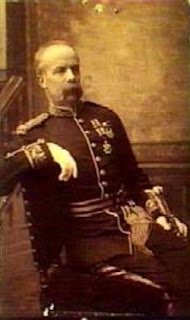 Francis Downes was born in Dedham, Essex, England on the 10th of February 1834. In 1877 he was recommended for the post of Commandant of Military Forces of South Australia and when he was offered it he accepted with great pride. He was credited with changing a poorly disciplined volunteer force into a highly trained and proud ‘army’!
Posted by Captain Darling at 18:20