Replicating the Russian Invasion Force in 28mm required the purchase of figures from several manufacturers. Askari, OutPost and Perry figures have been used. I really like the look of the OutPost figures they have that stocky Russian appearance, the Askari sailors are very good but I was less than impressed with the four army figures from them they look 'odd' especially the drummer (a Wallace and Grommit extra perhaps?) and lastly the Perry figures and Gatling gun were up to their usual standard. They uniforms portrayed are from the Russo-Turkish War of 1877 - 1878.
The Army figures breakdown as:
The Cossack figures breakdown as:
The Naval figures breakdown as:

The Russian General/Staff Officer from OutPost: 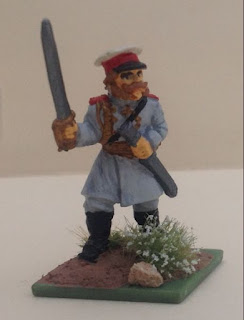 The Russian Command figures are mixture of Outpost and Askari figures:

A sample of the Russian Army Privates all OutPost figures:

All the Russian Army figures!

A sample of the Cossacks from OutPost:

Hide your women, all the Cossacks! 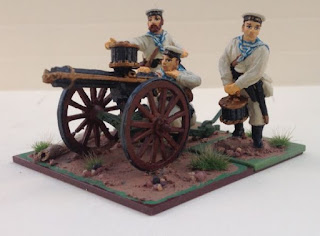 A note regarding the "Gorlov" Gun - Since in this 'history' the Russian army hasn't included any artillery in the invasion forces order of battle there would have been no actual Gorlovs available as they included these in their artillery units. I have in my 'history' taken the line that Lieutenant-General Lazarev being a forward minded general wanted to include these in his order of battle so decided while in Vladivostok to puchase several British made Gatling Guns with Broadwell Drum magazines and ammunition through arms dealers in Hong Kong and then ensured they were aboard his ships. Russian naval crews were familiar with the Gorlov so would man these weapons.


Coming Next "the action" begins with Scenario 1!
Posted by Captain Darling at 14:19